skip to main | skip to sidebar

Battles of Westeros and the first look into the game..

On the website of the FFG there is a first preview of the "Battles of Westeros"!

The designer of the game Robert A. Kouba presents a a look at some basic elements of the combat system.

And we get the first pictures of the dice and some figures!

At first, there is a eight-sided dice instead of a typical six-sided.

(Note:All the pictures are copied from the Fantasy Flight Games website!)

The eight-sided dice gives to the designer more potential for bringing the differences between individual units, like infantry and cavalry with unique abilities, out.

The combat capabilities of each unit and their total combination on the battlefield makes the difference.

The rules in the game should define the ranks of units depending on their equipment and experience.

The colours of the units are representing the level of the military training. The greens could be poorly trained irregulars, blues regulars and reds elite/heavy troops. (my guess!)

Some of them are more vulnerable during a fight like the green units.

This could be reflected in the game/during a fight by chancing the chance of hits against certain ranks (units) on the die itself.

So came the decision to upgrade to the eight-side dice; with 3 green rank hits, 2 blue rank hits, 1 red rank hits and 1 valor side which is typically a hit against any rank of unit. That's make seven!

And the last side is for the morale; which plays an important role in the game! (Bloggers note: The battles in the ancient and medieval times are lost, because the enemy loses his morale and flees; not because the winner kills them all! More about these theme in the next issue!)

In this case, for example the green units could be hit 50% of the time and the red units %25!

And what about mounted units, at first, the cavalry! (Bloggers note: I think and hope, there will another units mounted on different animals/races!)

Compared to the foot units have the Cavalry two advantages:

Their speed gives them the capacity of maneuver and being mounted additional strength!

Mr. Kouba decided, that the slowest cavalry on the battlefield is faster than quickest infantry.

While infantry only moves 1 or 2 hexes, cavalry may move 3 or 4 hexes both depending on their rank.

According their additional combat force, the cavalry could never be hit by valour hits rolled by infantry.

This rule is the only one, which I'll disagree and ask a guestion!

Will be there no foot units with halberd? (and how will be the one infantry figure on the above picture described?)

I can't imagine, because it's a game based on a fantasy/medieval background!

Thank you FFG and Mr. Kouba for this first look!

World of Westeros and the game...

The story of A Song of Ice and Fire takes place mainly on the continent of Westeros.

George R.R. Martin created the world “westeros” based on the facts of medieval Europe.

Geographical it is equivalent to South America.

The continent of Westeros with castles and towns marked. (from Wikipedia)

However, there is a large amount of land to the far north that remains unmapped, due to the extremely cold temperatures and hostile inhabitants known as wildlings.

The northern lands of Westeros are less populated than the south.

The five major cities of Westeros are, in order of size: King’s Landing,Oldtown, Lannisport, Gulltown, and White Harbour.

There are two other continents in the world in which Westeros exists.

The vast continent of Essos lies to the east, across the narrow sea.

The closest foreign nations to Westeros are the Free Cities, a collection of independent city-states along the western edge of this eastern continent.

The lands along the southern coastline of the eastern continent, collectively called the Lands of the Summer Sea, include Ghis and the ruins of Valyria, the former home of Westeros's Targaryen kings.

To the south of Westeros lies the continent of Sothoryos. Little is known about the continent save that it is inhabited by dark-skinned people and is "plague-ridden and largely unexplored".

Back to the game:
When FFG announced this new game, the eye-cather on the board was “a Battlelore game”!

As expected, this notice got a conversation started.

Is it a Battlelore game or not?

Or how far are the game mechanics of Battlelore installed in this new game?

There is also a displeased group of BL players, who wanted new expansions of Battlelore not “a new Battlelore game”

Today I want to give more details about this new game!

I got all this information from a betatest player (username:Jormi_Boced) at the opening of the FFG Event Center:

The board will not have anything on the edges so many of them can be placed adjacent to each other for larger games.(Bloggers Note: That means; “epic battles” will be one of the expansions.)

The board will run all the way to the edges in order to put maps side by side lenghtwise or widthwise. Also, some of the scenarios will be played lengthwise on one board.

There is no left, right or center zones.

Every player has his own basic card desk. Depending on the leaders they choose for their army they get more cards.

These leaders have reference cards and are an actual figure on the board within one of your units with some special abilities.

One is a multi-use ability and the other one can be used once per game.

There will also be different versions of the leaders to represent them at different times with different cards.

The story goes on!

Fantasy Flight Games has annouced a new “A Song of Ice and Fire" boardgame at the grand opening of their new event center in Roseville, Minneapolis.

The game, has the title Battles of Westeros, based on the George R.R. Martin’s A Song of Ice and Fire series. 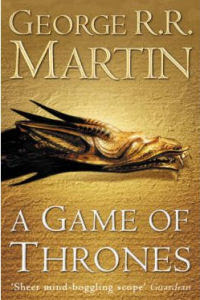 The story of A Song of Ice and Fire takes place in a fictional continent called Westeros. Most of the characters are human but as the series progresses other races are introduced, such as the cold Others from the far North and fire-breathing dragons from the East.

There are three principal storylines in the series:
the chronicle of a dynastic civil war for control of Westeros between seven families;

the rising threat of the Others who live beyond an immense wall of ice that forms Westeros' northern border;

and the journey of Daenerys Targaryen, the exiled daughter of a king who was murdered in an another civil war fifteen years before. She is trying to return to Westeros and claim her rightful throne.

As the series progresses, all three storylines become connected with each other.

In the boardgame "Battles of Westeros", as the name suggests, two players recreate the military conflicts, by taking part in battles directly from the books. 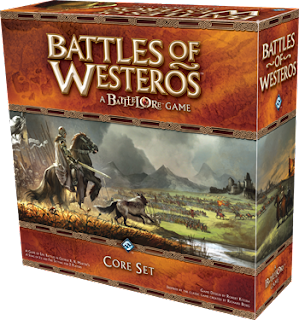 Players control either House Stark, with their seat in Winterfell, who have called their allies to defend their honor and lands, or House Lannister, an aggressive force living in Westerlands.

The battles in the game are at the outset defined, that means starting positions of each House’s units and victory conditions are prescribed.

A battle is played over several rounds.

The path to the victory varies from earning a certain number of victory points, to taking and holding strategic positions on the battlefield.

The game is designed by Robert Kouba for 2 players with an age limit of 12 and a battle takes approximately 1-2 hours.

and at last but not at least a photo of the author: 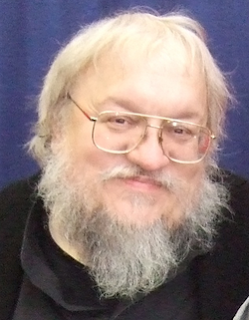